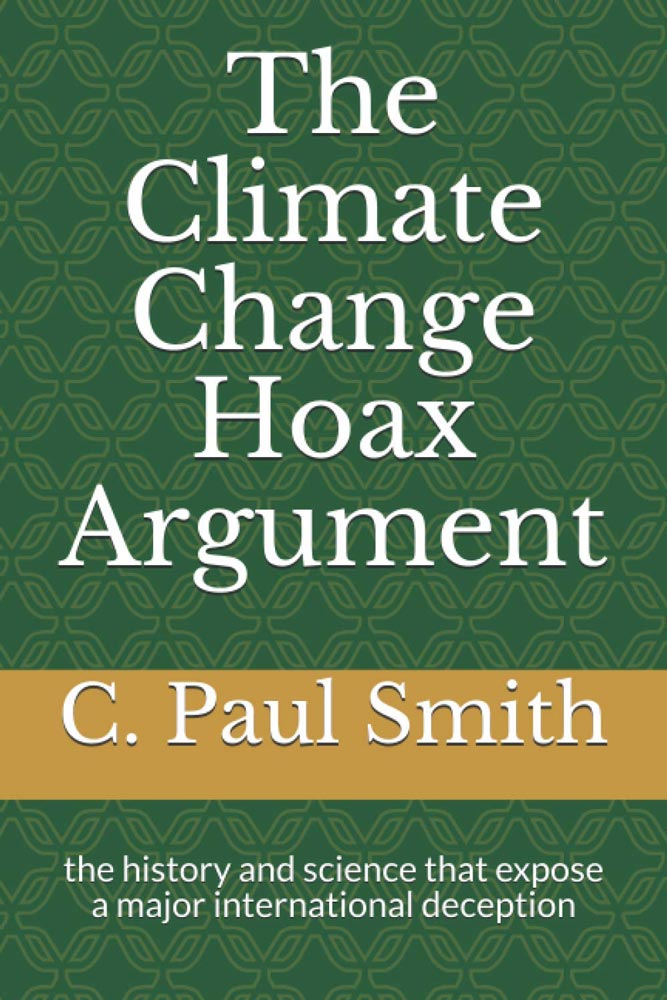 Many people believe that a consensus of scientists agree that humans are causing climate change that will cause catastrophic damage to the planet if we do not immediately enact numerous laws and practices to stop it. But those who believe insist that settled science has proved it, and they refuse to debate it, and they cannot explain scientific reasons to support it. In fact. The science does not support it—

The claim that humans are causing catastrophic climate change is a hoax. The Climate Change Hoax Argument presents the history of the hoax and the science that refutes the hoax. After reading this book you will be able to discuss the basic climate principles, and you will be able to intelligently discuss and refute the claims of environmental extremists that humans are destroying the planet.

Order The Climate Change Hoax Argument on Amazon for $4.42

Hundreds of renowned scientists from around the world dispute the claims of the IPCC that human-caused climate change is an existential threat to the world. Here are five such statements:

“Climate Change” is the current mantra of the environmental extremists who insist that humans are destroying the earth by emitting too much CO₂ into the atmosphere. These extremists insist that the use of fossil fuels is the root cause of this pending doom, and that if all nations do not immediately take drastic steps towards eliminating fossil fuels then the earth will be destroyed in ten years. They call this an “existential threat.” But they are wrong. Current and continued use of fossil fuels will not lead to the destruction of the earth; neither is it causing increased global warming that will cause this destruction; neither is it causing a rise of sea level that will devastate mankind; neither is it causing an increased number and intensity of tornadoes, hurricanes, wildfires, floods or droughts. Science does not support a finding of increases in extreme weather.

Some scientists asserted such extremist conclusions, but more and more scientists are abandoning the politically correct global warming/climate change movement as they are beginning to see the falsehoods, deceptions, and rigged predictions of those who are using “climate change” as a pawn in their attempts to bring about a one-world socialist, totalitarian government. The purpose of this book is to educate people and to alert them that the claim of human-caused climate change is a hoax, and that those claiming it have the burden to prove it. They insist the debate is over in order to avoid their fraud from being exposed. Until now the hoax has shielded them from having to prove their case, or even to debate the science. But the charade is over.