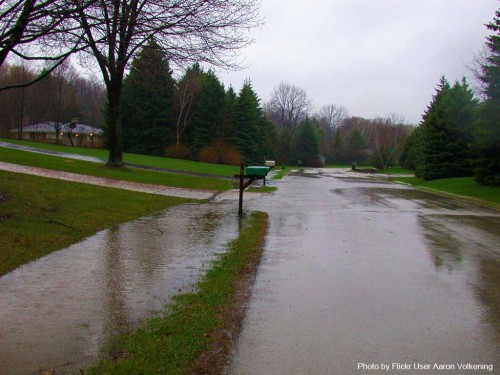 On about June 28, 2014, the Maryland Department of Environment (MDE) submitted its tentative (or proposed) stormwater discharge permit for Frederick County, Maryland.  This permit would require Frederick County to do $22.5 Million/year in stormwater remediation work, to remediate existing impervious surfaces that were not previously filtering stormwater runoff.   This would be a $19 Million/year increase.  To pay for this, Frederick County would have to increase property taxes by an estimated $500/property/year.   Frederick County has until September 29, 2014 to file any comments and objections to the tentative permit.
This is perhaps the most expensive mandate the State has ever sought to impose on Frederick County.   The purpose of the mandate is to clean the Chesapeake Bay, but as currently administered by the State, it will do virtually nothing to improve the water in the Bay, it will be extremely costly to taxpayers, and it will be devastating to businesses and property values in Frederick County.

You would think that in an effort to clean up the Chesapeake Bay the State of Maryland would propose a State-wide solution that applies equitably around the State.  You would be wrong.  The State mandates vary from county to county, and the permit expenses on Frederick County residents is twice as much per person as that which is imposed on Montgomery County and Anne Arundel County.

You would think that there would be a regional approach to cleaning the Bay that applies the same standards and requirements for all states whose stormwater runoff eventually goes into the Chesapeake Bay.   You would be wrong again.

Since Maryland produces only 20% of the water that flows into the Bay, you would think that even if Maryland removes the pollutants from its waters, this would not save the Bay unless all the other Bay watershed jurisdictions did the same thing.  Well, you would be correct on this one.

You would think that the State of Maryland would not require its people to spend $14.4 Billion to clean up its 20% of the stormwater runoff unless the other Bay watershed states spent $70 Billion together to do the same type of water improvement measures in their jurisdictions.  You would be wrong.  The other states are not making their people do the extensive, expensive stormwater remediation work that Maryland is imposing on its own people.

You would think that if Maryland imposes expensive remediation requirements on its citizens, and if our surrounding states do not impose these same requirements on their citizens then this would encourage businesses and residents to locate themselves somewhere outside of Maryland.   You would be right.

You would think that if Maryland was really serious about cleaning the Chesapeake Bay, and that if the State knew that one source of pollution was responsible for 46% of the nitrogen pollution, 26% of the phosphorus pollution and 33% of the sediment pollution—then the State would require that one source to take measures to reduce its pollution.  You would be wrong.  The one source I am speaking of is the water from the Susquehanna River that flows over the Conowingo Dam, in Maryland.

You would think that in the re-licensing application of Exelon Corporation (with respect to its operation of the hydro-electric facility at the Conowingo Dam), that the State of Maryland would make sure that the operation of that facility properly addressed water pollution requirements.  You would be wrong.

MDE’s tentative discharge permit is scientifically flawed and ineffective.  The little improvement that the mandates would bring is negligible and gives no expectation that it will help the Bay.   Furthermore, without addressing the Conowingo Dam issue and without a corresponding effort from the other states in the Bay watershed, the Maryland discharge permits cannot be successful.  Finally, the State has not measured the quality of the stormwater  that  comes out of Frederick County, and the State does not propose to measure it in the future.  Therefore, there is no way to assess whether the measures in Frederick County are effective.  Maryland’s approach is based upon broad models, which are in turn based upon assumptions which cannot be proven with respect to any one particular area.    The State of Maryland didn’t have any problem using models until it was recently pointed out that based upon model analysis, the water coming over the Conowingo Dam produces approximately 40% of the pollution in the Chesapeake Bay (46% of nitrogen, 26% of phosphorus, and 33% of the sediment).  At that point the State balked at addressing the Conowingo Dam problem until a study could be done to establish exactly what percentages of pollution come from over the Dam.

The impact of the State’s tentative stormwater discharge permit on Frederick County is twice as much per person as the requirements on Montgomery and Anne Arundel Counties.  This is manifestly unfair and wrong.  The State has made no effort to make the cost of this remediation uniform and fair.  Frederick County has no alternative but to expose this inequity and excess, and to fight it.  The cost on Frederick County would result in property tax increases of over $500/year, which would lower property values vis-à-vis Montgomery County and other counties in the State, would cause businesses to move away and discourage new businesses from moving here.  This will in turn result in lost jobs, increased unemployment, increased foreclosures and population reduction—all of which will make the cost of the mandates on remaining county residents even greater.  If the State is going to impose high taxes and fees, it needs to do so uniformly—not penalizing one or two particular counties.

Frederick County should participate in meaningful efforts to clean our waters, and it does.  But MDE’s tentative stormwater discharge permit for Frederick County has serious defects.   Those permits have significantly different impacts on each county.   They are too expensive. They are not cost-effective in improving water quality.  And they are scientifically flawed and ineffective.   For these reasons, Frederick County must object to the tentative permit.

When Does the Cost of Cleaning the Bay become Impracticable?
Scroll to top