Statement of Commissioner Paul Smith, Urging the BOCC to Revise Its Prayer Policy in Light of the Supreme Court Ruling in Town of Greece, New York vs. Galloway (2014) 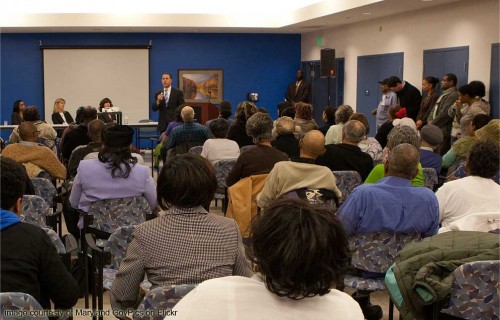 On May 5, 2014 the Supreme Court issued its ruling (5-4) in Town of Greece, New York v. Galloway, which holds that municipalities who have prayers at the beginning of legislative sessions may allow people who give such prayers to pray in the name of Jesus Christ. This ruling resolves a divisive issue that has been the subject of considerable discussion and concern around the nation for three decades. In particular, this issue has been the subject of much debate and discussion recently in both Frederick and Carroll Counties.

In Frederick County, in 2011 the Board of County Commissioners (BOCC) passed a resolution establishing a policy of praying at the beginning of its legislative meetings. However, the policy that we passed allowed only prayers that were non-denominational and non-sectarian—meaning that it was prohibited to pray in the name of Jesus Christ. Indeed, prayers in the name of Jesus were the ones that the policy was intended to prohibit. John Mathias, Frederick County’s attorney advised the BOCC that this policy was in keeping with a recent ruling of the Fourth Circuit Court of Appeals (Turner v. Fredericksburg, 534 F.3d 352 (4th Cir. 2008) and Simpson v. Chesterfield County, 404 F.3d 276 (4th Cir. 2005). I argued to John and to the rest of the BOCC, that I agree that Mr. Mathias was correctly reading the recent Fourth Circuit cases, but I insisted that that interpretation was wrong because it was effectively dictating the content of protected speech—prescribing (establishing) how one could and could not pray—the very action that the Establishment Clause prohibits. I argued that the Fourth Circuit has misinterpreted the 1983 Supreme Court case of Marsh v. Chambers. In addition, the Fourth Circuit approach is mistakenly premised on the notion that it is possible to force people to pray in a way that would not offend anyone. This notion is also mistaken. I lost my argument before the BOCC in 2011. But the Supreme Court’s ruling in Greece v. Galloway validates both of my arguments. Now is the time for the BOCC will revise its prayer policy to allow sectarian prayers, including prayers in the name of Jesus Christ.

In Carroll County, the import of the Greece ruling is even of greater impact. That is because just a matter of weeks before the Supreme Court ruling, a federal District Court judge in Maryland signed an Injunction ordering the Commissioners of Carroll County to cease and desist from praying in the name of Jesus at the beginning of their meetings. Then, my friend, Commissioner Robin Frazier, publicly took issue with that order, and spoke out in defiance of it, including making a statement that the Order was wrong and that she would not abide by it. Robin’s defiance brought national attention to this matter, as it was covered on national television. The Carroll County prayer policy was almost identical to that of the Town of Greece: Both policies allowed people of any and all persuasions to pray as they chose; and the prayers that were delivered for both governments were mostly Christian prayers, including many people mentioning the name of Jesus in their prayers.

Those who challenged the prayer policy and practice in Greece and in Carroll County complained that it is offensive and an Establishment Clause violation if any legislative prayer mentions the name of Jesus. The Supreme Court disagreed. The Court held:

The First Amendment is not a majority rule, and government may not seek to define permissible categories of religious speech. Once it invites prayer into the public sphere, government must permit a prayer giver to address his or her own God or gods as conscience dictates, unfettered by what an administrator or judge considers to be nonsectarian. [Kennedy, at 14]

Absent a pattern of prayers that over time denigrate, proselytize, or betray an impermissible government purpose, a challenge based solely on the content of a prayer will not likely establish a constitutional violation. Marsh, indeed, requires an inquiry into the prayer opportunity as a whole, rather than into the contents of a single prayer. 463 U.S., at 794-795. [Kennedy, at 17]

Consequently, it is perfectly proper for the Town of Greece, for Carroll County and for Frederick County to have a policy of allowing prayers at the beginning of its legislative meetings that permit the one praying to pray however he or she chooses to pray, without any direction from the government as to the content of those prayers, provided they do not denigrate, proselytize or otherwise establish a religion. Such prayer policies are not required to prohibit sectarian or denominational prayers. It is not a constitutional violation to allow someone to pray in the name of Jesus in his/her legislative prayer.

There has been some criticism of the Greece decision, including Jack Topchik’s opinion piece in the May 18th Frederick NewsPost, which criticized the Supreme Court, saying that the Court “ignores” the nation’s “changing culture.” But the analysis of Topchik’s piece indicates he does not understand the Court’s ruling. Because the First Amendment covers several broad, completing principles, it has led to an assortment of principles that sometimes seem to be contradictory to casual readers. The area of governmental prayer speech is one of those areas. For example, in the case of prayers in public schools, the Court has said state-led prayers are not allowed in the classroom or at high school graduations or at football games. Concern about government coercion of impressionable young minds has led to this result. But government-sanctioned prayers at the beginning of legislative meetings has been allowed and practiced from the First Continental Congress in 1774 until today. As Justice Alito’s concurring opinion pointed out, the group of men who convened in 1774 were from diverse religious backgrounds—so much so that they at first rejected the motion to begin their meetings with prayer. But after some reflection, they changed their minds. Although the delegates were of various different religions, they agreed that they wanted to begin their meetings with prayer, even though those prayers were sectarian and denominational. And that practice has continued until this day in Congress. Congress never intended the First Amendment to prohibit its practice of beginning legislative meetings with prayer. As the Supreme Court said in Greece, once the government invites a prayer, it cannot dictate the content of that prayer as long as the prayer does not exploit the opportunity to proselytize (Kennedy, at p. 12). The mere fact that a prayer or a lot of prayers are made in the name of Jesus does not run afoul the First Amendment.

In his excess zeal to criticize the Supreme Court’s ruling in Greece, Jack Topchik included a quote that he found on the internet about a Tennessee, high school softball coach who declared that people are not going to stop his team from praying in Jesus’ name before games. I acknowledge that this defiant attitude exists throughout the nation. But this is irrelevant to the legislative prayer issue.

The most disconcerting thing about the Greece case is that it was only a 5-4 decision. Topchik criticizes the majority for basing its decision on “political and ideological grounds.” In case Mr. Topchik has not thought this through, I would point out that Justice Kagan, in her minority dissent (joined by Justices Ginsberg and Sotomayor) based their opinions on “political and ideological grounds” rather than on sound constitutional principles. They misread the Marsh case to require that legislative prayers must be nonsectarian and nondenominational. But the Marsh decision did not say that. The dissent focused on a statement in Marsh that indicated that there was nothing offensive about nonsectarian prayers, but the dissent misread the import of those words; such a reading is inconsistent with the history of legislative prayers in the United States. Justice Kagan’s dissent is an example of sloppy analysis. You would think that if America is a tolerant society that appreciates diversity, then we should certainly be able to tolerate someone praying according to the dictates of his/her own conscience—whether it be in the name of Jesus Christ or some other god or in the name of atheism. It does appear that the litigation that spawned the Greece case was initiated by people who took offense at people praying in the name of Jesus. I agree with Topchik that “political and ideological grounds” rather than proper judicial analysis was manifest in some of the Justices’ opinions in Greece, but not from the majority—it was from Justices Sotomayor, Ginsberg and Kagan.

CONCLUSION: For all of the foregoing reasons, now is the time for the BOCC to revise its prayer policy to allow sectarian prayers, including prayers in the name of Jesus Christ.
_______________________
For those interested in reviewing some of the history of this debate during the term of this BOCC, please see:
“New Frederick County Law Will Tell Us How to Pray” (May 2011), and
“County’s New Prayer Policy in Light of the Ruling in Joyner v. Forsyth County” (August 2011)

2014 Flier – Paul Smith for Maryland House of Delegates District 3A