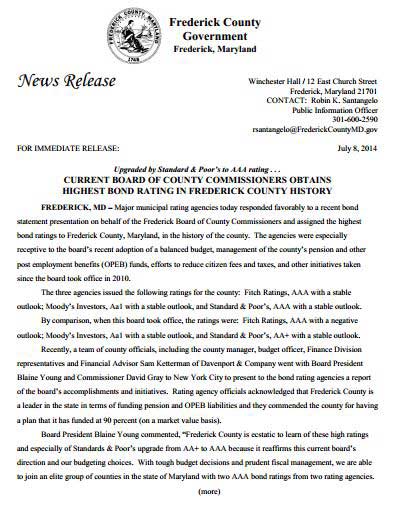 Jan Gardner likes to compare her Board’s last approved budget (for FY 2011) of $438 million(i) with the last approved budget of the Young Board (for FY2015) $525 million. It is true that the Young Board’s budget is $87 million more than the last budget of the Gardner Board. If that was the end of the analysis, then Gardner would have a strong case that her Board was more fiscally responsible. But, an analysis of all the facts discredits Gardner’s conclusion; the superficial analysis that Gardner hopes will be sufficient to convince thee public cannot withstand simple, rational scrutiny. The FY2015 approved budget of the Young Board is more fiscally responsible than any of the Gardner Board budgets. Here are the facts.

Of the $87 million budget increase, $48.6 million is not an increase, but is merely a reporting (accounting method) change, in which the County has now included two enterprise funds (Fire & Rescue and Permitting & Development Review) into the General Fund. $20.4 million is due to State tax increases, mandates and the increased County costs to address State service cuts. $6 million are one-time budget transfers that do not increase taxes. $14.6 million is due to increased costs for education and for fire & rescue services, all of which are reasonable for the corresponding population increase of 5,000 over the last four years. These are broken down further as follows:

The Young Board cut the size of the County employee force by 451 employees (or 19 %).(x) This has resulted in a savings to taxpayers of over $21 million/year. The Gardner Board increased the size of the County workforce by 222 employees through FY2010. It was not until her last budget, the FY2011 budget—two full years after the 2008 crash—that her Board cut the employee force by 145 people (still resulting in a net increase in the number of employees of +77). She was at least one year too slow in making this needed adjustment.

During the Gardner Board, Fitch lowered the outlook on the County’s bond rating from “stable” to “negative” due to decreasing fund balances. The major changes made by the Young Board succeeded in restoring the County’s bond rating outlook with Fitch to the highest level (AAA stable) in 2012. The Young Board promptly made major expenditure cuts by reducing the size of the workforce. The Board then made a total of $4 million of additional contributions to the employees’ retirement funds to bolster those funds, so that they are now 90% funded—this is one of the best ratios in the State, and it is a significant improvement over the funding percentages during the Gardner Board. These actions, plus correcting the budgeting for fire and rescue services, have all improved the County’s fiscal position. On July 8, 2014, Standard & Poors announced that it was increasing the Frederick County bond rating from AA+ to AAA stable—the highest bond rating that Frederick County has ever had. This report and these improvements refute Gardner’s claims that she was a better fiscal manager of the County’s finances; no Board has been better fiscal managers of the County than the Young Board.

CONCLUSION: Jan Gardner’s claim that this Board has increased the size of the budget by $87 million is misleading at best. Only $35 million of the higher budget represents an increase. And $21 million of that increase is due to increased burdens and taxes from the State. This leaves only $14 million of other increases—and they are for increased funding for education and for fire & rescue services, attributable to the 5,000 new residents. The Young Board has stopped the exploding growth of the County budget that occurred during Ms. Gardner’s tenure on the Board; it has kept increased expenses to a minimum; and it has improved the County’s overall fiscal strength, as reflected in the improved bond rating.

ii. The Gardner Budget did not include the cost of Fire & Rescue services–$43 million for FY2015. County taxpayers paid for fire and rescue services in the Gardner budgets, but this was a separate tax. What the Young Board did was include the cost of fire and rescue services in the County’s general fund. This resulted in a $43 million increase in the FY2015 budget, such that the County tax was higher, but the separate Fire & Rescue tax was eliminated. This did not increase the amount of the total County budget; it merely reflects a change in the accounting method—whereby Fire & Rescue services are included in the County Budget rather than billed as a separate tax. There is no net change in the tax burden on individual taxpayers by this budgeting change.

iii. The State transferred to the counties (or “shared with the counties,” as the State would say) the obligation for the counties to fund teachers’ pensions. The increased cost on Frederick County is approximately $8 million in the FY2015 budget.

v. Because the Maryland State Police reduced the number of officers serving in Frederick County, this has increased the law enforcement burden on our Sheriff’s Office. The County’s FY2015 budget includes $.65 million more for the Sheriff to help meet this need. The Sheriff requested three times this much to meet the increased burden that has been put on his office. But the BOCC was not able to fully fund his request at this time.

vi. The State-mandated cost to Frederick County to do stormwater remediation has increased by $2.8 million more than it was in the last Gardner Board budget.

ix. The FY2015 budget includes $6.2 million which are one-time budget transfers, and which are not increased tax burdens. These include a $4.4 million transfer in connection with the transfer of operations of the Citizens/Montevue facility, and a $1.8 million amount which is due to a delay in the sale of the 520 North Market Street property.

xi. Actually, Ms. Gardner did not specifically state that the budget should be increased to fully fund the BOE request. She said on the radio, just prior to the May 6th budget hearing, that she thought the County’s needs could be met without raising taxes. However, if that is the case, then Ms. Gardner should have indicated what parts of the proposed budget that she would cut in order to come up with the extra $17 million requested by the BOE. She declined to do this.