The following ad will be printed in the Frederick News Post this Saturday. 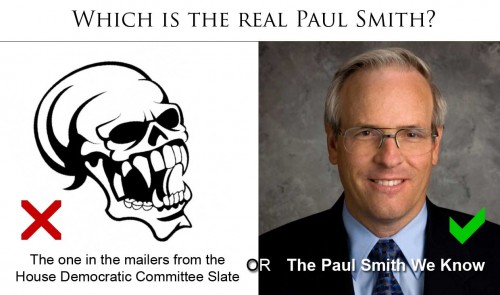 It is most appropriate that the spookiest, scariest day of the year should precede the General Election by just a few days. One of the attractions of Halloween is our fascination with distortion and ugliness—there is a place in our hearts for a certain amount of distortion on Halloween. And so, campaign smears and mis-truths fit right in. For those of you who received from the House Democratic Committee Slate five mailers that presented a distorted and false image of me, I want to help you sort out the Halloween mask from the truth.

Integrity and character are the foundations of my campaign. I may not always be the most flashy candidate, but people can count on me to tell the truth and to give reasons for every vote and decision that I make. I’m not sure that it will be possible in this paid ad to fully address the multiple distortions and misrepresentations made against me in the five Halloween Hit Pieces from the House Democratic Committee Slate, but I will attempt to correct some.

Lie/Distortion # 1. The first mailer stated that I said “women do not belong in the workplace.” I never said this. This is a misrepresentation of my statements and my views.

Lie/Distortion # 2. One mailer stated that my vote to cut Head Start made it “tougher on working families.” This is false. In 2011, when the BOCC transferred the Head Start program to a non-profit entity, this saved the County over $1 million a year, and resulted in NO CUT IN SERVICES to families who place their children in the Head Start program. The YMCA now operates the program.

Lie/Distortion # 3. One piece quoted me as saying “women should stay home and stay married if they want their children to succeed in life, just like his wife did.” This is another misrepresentation; I never said this. The Democratic Committee Slate twisted my words and their meaning, and then added some bad grammar to boot.

Lie/Distortion # 4. When questioned by a reporter from The Washington Post in 2011, I did state the following: “I feel that wherever possible, mothers should be at home with small children.” The Democrat hit piece omitted the introductory qualifier in order to attempt to make a more negative hit on me. Contrary to what the hit piece states, the statement was not made at a BOCC meeting prior to any vote, but rather was made at another place and time.

Lie/Distortion # 5. The fliers portray me as being anti-women and lacking in understanding of women. This is a misrepresentation. As an attorney for over 35 years, I have represented hundreds of women, including dozens of single-parent women with young children. I have represented many of them on a pro bono or reduced fee basis, to help them deal with very difficult financial, marital and children issues. There are few people who truly understand the issues of single mothers as well as I do.

Lie/Distortion # 6. With regard to my contributions to NARTH—Yes, I have made small contributions to NARTH. But the Democratic Committee Slate made a misrepresentation of “reparative therapy.” It is incomplete and therefore misleading to state that this therapy “tries to convert gays and lesbians into hetero-sexuals.” Reparative therapy is voluntary; it is only for those who wish to diminish or change erotic, same-sex attraction that they may be experiencing. Why is it that the Democratic Committee Slate wishes to criticize and belittle those men and women who desire to change same-sex attractions that they may experience? People have a right to choose to become straight as much as to become gay. Why does the Democratic Committee Slate choose to criticize these people? Someone who is not prejudiced would not speak disparagingly of “reparative therapy.”

As an attorney I have had a number of gay clients through the years. I have some now. I represent them with the same thoroughness and vigilance that I do for all my clients. As an attorney, it is not my role to judge them. I respect all of my clients, and I respect all people.

Lie/Distortion # 7. The Democrat attack piece states that my values “are not the values Frederick is built on.” This is not true, and I think most people know it. As far as values are concerned, the House Democratic Committee Slate is the one whose values are a problem. If they had the value of integrity they would not stoop to misrepresentation, mis-statement and ridicule of a particular class of people.

I think we know why—because they support all of these flawed policies. My wife and I have personally delivered my campaign information directly to over 20,000 homes in District 3A. I have written extensively on these issues, and have provided forums and handouts for all who desire to understand them better. My website contains thorough facts and information on these and many other important issues. It is not too late to go there if you desire more information.

No candidate has spoken out more often or more thoroughly on each of these issues. If you care about correcting them, then cast your vote for me.

The five Halloween hit pieces against me were indeed very scary, but remember they were just for Halloween. Enjoy them for what they’re worth, and now that Halloween’s over, put them where they belong–with the candy wrappers, rotting pumpkins and other trash.

Vote for Paul Smith, Candidate for State Delegate, District 3A