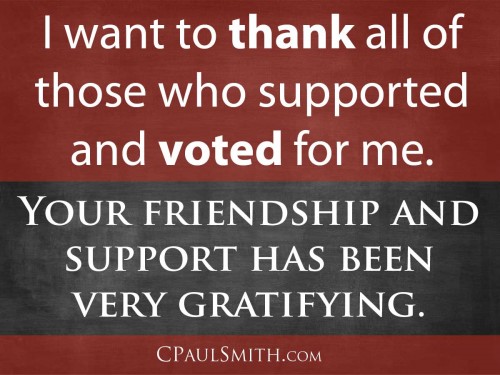 I was not successful in capturing one of the two seats for State Delegate in District 3A.  When the results were in at 10:30 p.m. Tuesday night, I was in third place by about 900 votes.  Carol Krimm (at 28%) and Karen Young at (26%) were the two winners.  I received 24% of the vote, and Vickie Wilkins received 22%.  I want to thank all of those who supported and voted for me.  Your friendship and support has been very gratifying.

We knew from the beginning that my race would be close because the State Legislature changed the boundaries of the district two years ago to try to ensure that two Democrats would be able to win both seats.  This redistricting, plus the six mailed hit pieces by the State House Democratic Committee Slate (at an estimated cost of $60,000) helped defeat me.

Thank you again for your support.